Based on extensive research and viewing of the work at Loyalist College, Dr. Howard Bloom, Coordinator and Professor in the Child and Youth Worker Program at the Orillia Campus of Georgian College, determined that a virtual world environment could enhance student learning and confidence.  The students participate in live, extensive interactive role-playing in the classroom – replicating situations they might encounter with children and youth in their eventual workplaces – but in a virtual world that provides a safe environment in which to extend the experiences into more life-like and challenging encounters.

The first step in creating a virtual world for learning at Georgian College was to purchase space on Second Life, an island where virtual reality scenarios can be developed using the software and tools offered. Dr. Bloom then collaborated with the Computer Science Department to develop the island and the scenarios. Four students were assigned to work with him and Professor Jaret Wright to create the virtual world as their work experience. In 2012, they developed four stories as virtual reality experiences on the Georgian College island in Second Life.

The scenarios to be used in the Counselling Skills class were tested in the summer of 2012 revealing that the students benefitted from the scenarios by developing basic skills, as well as confidence in their abilities. The testing of, and refinements to, the scenarios continued through the fall term in 2012, with the scenarios used for the first time in the Winter 2013 semester in a seminar course.

The virtual world can be adapted to the classroom. Professor Bloom integrates the experience through the use of interactive Smart Boards, or overhead projectors with audio, with the professor or the students in the class playing the role of a recalcitrant youth and two students playing the role of the counsellors from a computer lab nearby. The avatars appear in the virtual world on the Smart Board or projector. The ‘counsellors’ communicate using headsets from outside the classroom. In the virtual world, the youth can become agitated and advance towards the counsellors, requiring them to have their avatars respond both verbally and physically in appropriate ways.  The class can then debrief the encounter, revealing key lessons such as how multiple, overlapping voices are ineffective. The role-play can be replayed and specifics of the incidents can be highlighted, notes created, and the images saved for student reference.

Role-plays can also take place at a distance as students, with or without the professor, can sign into Second Life and duplicate challenging situations and practice skills. They sign in from their computers and communicate verbally and through the manipulation of the avatars representing the clients and the counsellors. The Georgian College island offers a tutorial area which allows them to learn how to use Second Life.

The virtual world offers a number of locations that can be adapted for practice of behaviour during encounters and counselling. There is a mental health centre with meeting rooms for formal counselling sessions, offering the option of watching the sessions from outside the room through one-way glass. 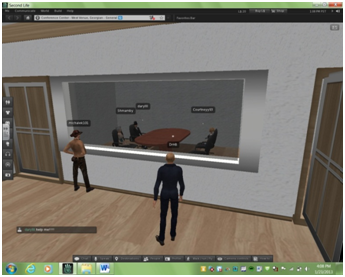 A conference room is available for virtual staff meetings and group discussions, in which students can practice acting as advocates for their clients.  Based on an actual situation, the students built a virtual trampoline to replicate a situation in which a youth refused to get off a trampoline. This allowed experience and analysis of issues such as safety, appropriate distance, and maintenance of control. The simulation of a group home allows the students to undertake mundane tasks, such as dishwashing as the setting for the engagement with the youth or child  they are counselling.

Other virtual situations have been developed for students in the Community and Justice Service program, one of which features a traffic accident that requires measurements, assessment of logistics, detailed analysis, and note taking, as well as a response to an emergency.

Besides the scenarios, students have requested virtual office hours in Second Life, which Dr. Bloom holds at 7:00 p.m., so that he can respond to students when they are at home struggling with their assignments.

As well, based on funding from the Law Foundation of Ontario, a resource centre on Fetal Alcohol Spectrum Disorder (FASD) is available in Second Life, allowing students in multiple programs to learn about FASD.

The live, classroom role-plays for counselling are useful for learning but are restricted by the need to maintain the safe space of the classroom. The virtual world experiences allow the scenarios to develop more fully, with the avatars more closely replicating the behaviour and responses of children and youth.  More complex behaviour can be virtually role-played in settings that reflect reality, such as responding to a youth who refuses to leave a campfire at night, simulating the physical dangers the situation implies. The pedagogical strategy is to have the students begin with empathy, and through experience and virtual practice, develop the skills to deal with difficult behaviours.

The students have been asking for more scenarios. In response, one student is building a virtual classroom to use as the model of an elementary school class. Scenarios can then be devised which take advantage of the topography of a classroom, with desks, pens, backpacks, etc. to replicate situations in which student safety and control of the situation are paramount.

Situations such as the traffic accident could not be created in real life; with the virtual accident, all students have unlimited access to the scenario in order to complete their work.

It is relatively easy to build scenarios in Second Life and pre-constructed parts, such as cars and rooms, can be purchased at a relatively low cost. As well, gestures and expressions for the avatars, expressing fear, laughter, and other reactions, can be integrated, making the action more life-like and emotive.

Most of the challenges have been technical in nature – ranging from Internet connections, to freezing of the action, to serving and linking many different kinds of computers. The configurations for the system have been set for maximum accessibility. For example, when working from home, Dr. Bloom is able to participate in and observe virtual interactions using only a low-level broadband connection.

The use of a virtual world to substitute for the face-to-face lab situations would allow the entire Child and Youth Services Worker Program to be offered online. Students could use the virtual world to practice with each other and the professor could observe in real time or view a recording in order to provide feedback. Dr. Bloom sees the integration of practice in the virtual world into online learning as a key way of “bridging the connection to experiential learning”.  Extensive research supports the efficacy of virtual worlds for learning in counselling environments.

The Georgian College virtual world is being extended with the construction of a prison  on the island for students in the Justice program to practice dealing with virtual prisoners, including issues of rights and safety.

A scenario is being developed for a Contemporary Social Movements class to replicate the situation when a social movement demonstration evolves into a riot. Students can experience how, why, and what happens in the safety of a virtual world, with social work students taking on the roles of the police officers and the Justice Program students playing the roles of the rioters.