A student-centered pedagogical model for teaching and learning

As a teacher making extensive use of technology, James Kinney, a professor of graphic design at George Brown College in Toronto, was finding that maintaining mastery of the software in the field was increasingly difficult. The rapid pace of innovation in the software used for graphic design meant there was an equally rapid pace of obsolescence of the knowledge and mastery on the part of the teacher. To offer curriculum based on the latest software required extensive and continual preparation: for 42 hours of class, 168 hours of preparation was necessary.

The time lag from the release of a piece of essential software, to its acquisition, installation, and testing by the College, to faculty integrating it into the curriculum, and finally to its introduction for student learning could be 12 to 18 months. But the rapid rate of software evolution means that introduction in the curriculum often equates with obsolescence – and so the students are exposed to dated product. The time gap had to be addressed so that students would be learning the latest versions of software.

A new model of pedagogy was necessary – the model that was introduced moved from a top-down, teacher-delivered curriculum to one of distributed teaching and learning in which everyone in the classroom is both a teacher and a learner.

James Kinney offered his students in first year Graphic Design a choice – he could teach about the software that he already knows using lectures and handouts or he and the students together could explore the new software, preparing documentation and presentations for their classmates. The students voted for the exploratory model.

The new model of pedagogy is called Rapid Integration of Skills and Knowledge – RISK. The latest version of each software application is installed on the computers in the graphic design lab. The students are divided into research teams and assigned three major software titles in each group. The teams work with each software application to understand its structure and functions and prepare documentation for its use based on their experience and web research. Team presentations are made to the full class using visuals, captions, and full text, the documentation is exchanged, revised, and edited, and finally assembled into a manual entitled Legacy of Learning. In the following years, students update and add to the manual.

The professor becomes a co-learner, with a particular role in designing the overall focus and ensuring that the students are learning what they need for their program and their careers. He is no longer the sole voice of authority in the class, as sources from the

Internet and the students’ own discoveries result in more voices being recognized. The students are co-researchers, co-testers, and co-documentarians.

The students also apply their knowledge and skills as they take advantage of the various software packages in the context in which a designer would use them – the development of the manuals containing their software documentation, cover art for the manuals, and the creation of a high-realism illustration. 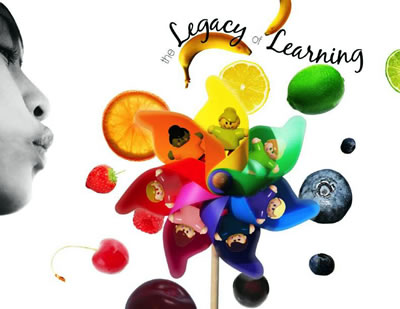 Professor Kinney got a research grant from Apple to test the utility of its Podcast Producer technology for education. He worked with four of his students to envision and evaluate how the technology could be used as a teaching tool to support students’ collaborative learning about graphic-design software. They built and tested an infrastructure to enhance the environment in which the students could collaborate through the use of a wiki, blogs, and podcasting. This infrastructure was introduced to six graphic design classes at George Brown College in 2009.

The students in these classes developed this initial infrastructure into a searchable knowledge repository called The Knowledge Garden. Students are divided into teams and given space in the Garden that they populate with the podcasts and handouts they create on their assigned pieces of software, a research area, an almanac of best practices in knowledge creation, and a gallery. The repository can be referred to by other students at George Brown and is expanded and updated by succeeding classes.

This collaborative environment is now central to the pedagogical model and the students are introduced to it prior to starting their exploration of the software.

Using the RISK pedagogical model, students explore, learn about, and experience concepts of graphic design and the structure and functions of the latest software. In addition, they become active participants in the research and learning, developing skills in framing content, writing, editing, citations, publishing, and presenting.

The learning is all applied learning, set within a context of developing products – similar to their future relationships with clients.

The students also develop skills of independence and collaboration, organization and adaptability – assets to working in a field where everything keeps changing.

Through building and contributing to The Knowledge Garden, students learn about and experience how to graphically and intellectually structure and present knowledge.

Adapting the Rapid integration of Skills and Knowledge model results in radical changes in the classroom dynamic as the normal authority of the professor as the centre of knowledge is flattened and the relationships become more democratic. New rules of engagement are required for the classroom. The shift can be difficult for both teachers and students.

When Professor Kinney asked for all the new software to be loaded into the Design Lab computers for student use, the response was that nobody was ready for this. The initial compromise was that both the older and the new software were loaded into the machines.
In year one, there was substantial push-back from a group of students who wanted the traditional classroom model with the professor delivering the information. The compromise was that two streams were offered – one with RISK followed by the majority of the students and the other with presentations and handouts from the professor.

In January 2012, the RISK model will be re-introduced with enhanced infrastructure provided by the College in a new facility. The information in The Knowledge Garden will be pruned with selections made of material to be updated and replaced. As well, new mobile apps will be assigned to some student groups to explore, document, and present to their classmates.

Discussions are also underway with Adobe to have a small group of students working on Beta versions of their new products.
Professor Kinney welcomes the opportunity to discuss his model with other institutions, as well as the broader issues concerning the future direction of technology-enabled learning, changes in pedagogy, classrooms, and the roles of teachers resulting from the accelerating cycle of innovation.