Nandini Sarma at Carleton University in Ottawa and Hélène Knoerr at the University of Ottawa, two instructors in French-as-a-second-language (FSL) programs, had difficulty finding online FSL learning materials that responded to their students’ learning needs. Students had commented on the lack of materials featuring the types of conversations they would encounter in everyday life and the voices of authentic Canadian speakers (rather than the scripted actors in most teaching aids). Also, usage of much of the available material is limited by copyright restrictions; the resources cannot be copied, adapted, or downloaded.

A video library of accessible, flexible, and free online resources was needed to allow students to learn French by listening to ordinary Canadians speaking everyday French.

The development of a central source of video materials could also provide an online location for FSL instructors to share expertise and resources and create an online community of practice.

VidéoTech is an online library of video clips for teaching and learning French as a second language in post-secondary institutions and secondary schools. The web site provides FSL students and instructors with free access to open source digital video content and exercises that support students in their understanding of authentic, everyday language, spoken French grammar, vocabulary, and pronunciation.

Support was received from Carleton University’s Educational Development Centre, Carleton University Online, and Inukshuk Wireless’s Content Development Fund to promote learning in each of the regions it serves. Inukshuk Wireless is an equally owned partnership between Bell Canada and Rogers Communications created to build and manage a Canada-wide wireless broadband network licensed by Industry Canada.

The development of VidéoTech began with the recording of videos of extended conversations and interviews with Francophones who spoke about their lives, jobs, families, interests – all topics of ordinary conversation. The hours of videos were edited into short clips, each of which was linked to a number of points of French grammar, vocabulary, and pronunciation. Using VidéoTech, a student can chose topics and language levels and be linked to the videos that contain examples of those specific points; instructors can assign specific themes for in-class or outside work. 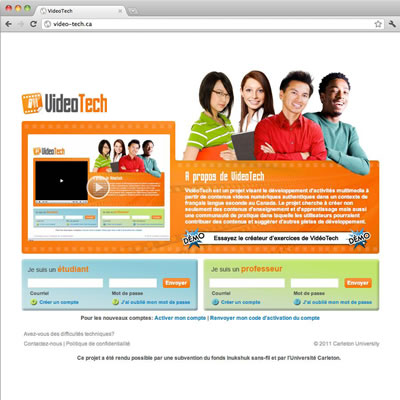 An exercise builder was added, offering seven question types. Some exercises have already been created, most with autocorrect, to make the videos more useful and to showcase the potential of the exercise formats. To further help instructors, VidéoTech contains videos that explain how to navigate the site and create different types of exercises. Users can create their own exercises and are encouraged to share them on the site so that they can be used, and adapted, by other instructors.

A Wiki and a discussion forum have been set up so that instructors can collaborate on further development of the site and discuss pedagogical applications and issues.

VidéoTech is an open site, but users must register to get access. It provides a free online video library with resources that can be used, revised, and added to courses to respond to student learning needs at all levels of learning French in post-secondary and advanced secondary education. The clips contain examples of Francophones with different accents, language levels, speeds of speaking, and modes of expression – replicating the French that students encounter in everyday life.

VidéoTech has been available for only a few months, but it has received positive responses from learners and instructors:

The initial analysis of the hours of videos to create individual clips and then link each clip to the points of grammar or language usage that it illustrated was a very detailed and demanding task. New videos submitted for the site would have to be analyzed to the same extent.

One of the major challenges is letting people know that this resource is available and free for them to use, whether they are learners or instructors.

Building a new online video library always introduces technological issues in making it as accessible and user-friendly as possible. For example, VidéoTech is accessed via web browsers and the variety of web browsers used in education created a challenge. It has been made compatible with the more common browsers, such as Firefox, Chrome, Internet Explorer, and Safari.

Instructors and students of French as a second language in post-secondary and other institutions across Ontario are most welcome to use the video library and exercises in VidéoTech in whatever ways suit their learning and teaching. It runs under a Creative Commons License that prohibits commercial usage but it does require registration for access.

The instructors who created the site would like to see it develop through input and collaboration from the FSL community throughout Ontario and Canada. Videos and exercises can be submitted for inclusion; it is hoped that users would edit the videos into topic-specific clips and that the entire community of users would participate in the preparation of the transcriptions and translations that make the clips such useful learning tools. The community of practice would collaborate on the creation of additional tools and a shared sense of pedagogy.

Nandini Sarma, one of the instructors who developed the site, believes that the framework that was developed for VidéoTech can be used for the learning and teaching of other languages. She would like to see the framework used for languages at risk, such as Aboriginal languages. Native speakers could be captured on video and have their voices and stories form the basis for the learning of the language. It could also be used effectively for the teaching of sign language.

The online video library can be accessed at http://video-tech.ca