Student learning in a virtual world

In the Justice Studies program at Loyalist College in Belleville, a customs and immigration track is offered to students who wish to pursue careers in customs-related fields, including positions as Border Services Officers (BSO) with the Canadian Border Services Agency (CSBA). As part of their training, the students participated in field placements at various border crossings where they observed the real-life transactions taking place. Due to changes in security procedures after September 11, 2001, these placements are no longer possible. In class role-playing and written scenarios were used to replace the border experience, but they lacked the reality and dynamism of the actual situations.

To bring the realistic component back into the curriculum, it was decided that a customs port would be built in a virtual world where the students could function as Border Service Officers. The use of a virtual world for learning was based on research that showed that participants in virtual worlds identify quickly with roles and situations they encounter in virtual situations, they experience the virtual interactions as real events, and those experiences carry over into real life.

Loyalist College has been an active user of Second Life (http://secondlife.com ), an online virtual world, since 2006, when it first established a virtual campus in Second Life to enhance classroom teaching. Second Life is built on open source software that allows users to interact with each other using avatars with clients building environments in Second Life that are visited by users.

Using Second Life, Loyalist College created a fully functioning border crossing to train the students on interview techniques used by Border Services Officers at primary ports of entry to Canada. The development process was started three months before the launch and involved faculty and the instructional designers, 3-D designers, and builders within the Virtual World Design Centre at Loyalist.

The simulation training takes place during class time. Each student takes on the role of a BSO, with his/her avatar interviewing the avatars of the travellers wishing to enter Canada. All communication is done by voice communications in Second Life, with the people playing the travellers in a separate room from the students. 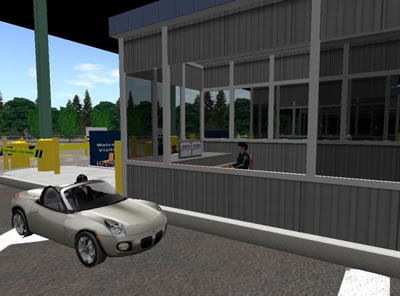 The elements of the border simulation include:

Each student interviews three or four travellers and the entire class observes the interactions and discusses the situations and the responses.

Additional elements have been added to the scenario, including an immigration office and an airport crossing, each of which provides the student with experience in different procedures. As well, the secondary site for auto searches features a virtual car that can be completely dismantled so students learn all possible places where contraband may be concealed. This learning is then reinforced with a visit to the auto shop at Loyalist College and the search of an actual car.

The Canadian Border Services Agency used the simulation as part of the distance learning pre-training for the BSO recruits before they attend the training in Rigaud, Québec. About 50% of the recruits were able to access and follow the simulations at a distance. Training officers playing the roles of travellers were scheduled online at specific times so that the recruits could take part in the role playing.
Outcomes and Benefits

The students in the customs and immigration track are assessed on their interviewing techniques as part of their final grades. Students participating in the first year of the Second Life border simulation achieved a grade standing that was 28% higher than the previous class who did not utilize a virtual world. The next class, using Second Life, scored a further 9% higher.

There are also less tangible benefits, as the students acquire greater confidence in their capacities, and gain real identification with the role of a BSO. The open-ended nature of the encounters and the subsequent classroom discussions allow the students to develop capacities for lateral thinking and to assess their own responses as well as those of their classmates.

The students become familiar with the mandatory questioning, but they also develop their observational skills and capacity to respond to a wide variety of travellers and to developing situations. The experience is more complex than previous training when the students went to the border crossings, as they were only observers. In the simulation, they are active participants.

During interviews after the first-time use of the simulation, the students commented on the reality of the simulation, its interactions, learning from watching others, and how the virtual learning experience met or exceeded their expectations. As one student said: “Seeing, hearing, doing: we were actually there.”

The border simulation is seen as a best practice in how virtual worlds can be applied to learning, especially to replicate situations that are inaccessible or dangerous.

The newness of virtual worlds for learning was a challenge for Loyalist College, as they created the first virtual campus in Second Life of any post-secondary institution in Canada. They were in “unknown waters” as they developed and tested ways of using a virtual environment to enhance student learning.

There were also other challenges along the way:

The Virtual World Design Centre has used Second Life to develop other applications for learning at the College and for external clients. They built an award winning model of a US/Mexico border crossing, environments for psychiatric nurses working with youth to rehearse dangerous and difficult situations, and a partially constructed house to explore the roles and skills of construction workers.

Loyalist College is moving away from Second Life to an environment constructed using the Unity 3-D authoring tool set. This shift is described in Creating a virtual environment for learning at Loyalist College, another description in this series.

Ken Hudson, the Managing Director of the Virtual World Design Centre, works from the principle that: “Virtual worlds are naturally engaging experiences and therefore hold great promise as learning tools for augmenting the classroom reality.” The ways of using virtual worlds for learning are becoming clearer and there are affordable ways for educational institutions to try them out. Loyalist College has developed a lexicon of what works.

The Centre works with clients in government and education as consultants, as artists and builders, and as full-fledged developers for virtual environments applied to learning. These services are available to any post-secondary institution in Ontario. As well, Ken Hudson is happy to share the Centre’s knowledge, field questions, act as a point of research, and discuss or speak on the experiences at Loyalist College.