The initial steps Algonquin College in Ottawa took to become a Digital College are outlined in Digital College – Organizational change for enhanced student learning and engagement in Contact North | Contact Nord’s Pockets of Innovation Series. Among the initiatives is the Mobile Learning Project, requiring all incoming students to have a mobile device that matches the requirements of their program. Recent research shows that students have an average of 2.5 mobile devices.

Consistent with its goal to embrace digital education and mobile learning, Algonquin has also launched an e-textbook initiative that is targeted to provide 100% of the students with 100% of their resources 100% of the time. The goals of the initiative are: 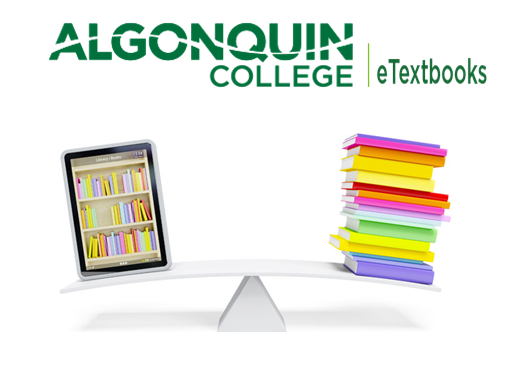 Pilot Phase: The integration of e-textbooks into College programs began with a pilot in January 2013, with about 700 first-level students in 6 programs being provided with all of their texts for free in digital format. This amounted to almost 2,300 e-textbooks in 27 courses.

As part of the pilot study, the 4 major textbook publishers who supply 80-85% of college texts, Pearson, Wiley, McGraw-Hill, and Nelson, donated the e-texts for free. In return, the students provided feedback on their use of the e-texts. The response from both faculty and students was positive.

Two different platforms were used during the pilot. One was designed to provide access to the e-texts only online and through a web browser, while the other required the installation of a software package that allowed students to download and access their e-texts while off-line.  The pilot showed that the optimum platform for delivery of e-texts was through integration with the learning management system (LMS), with both online and off-line access. In addition, it was clear that students would want access to their e-texts from any of the multiple mobile devices they owned.

Students could print the entire e-texts, but very few availed themselves of this capacity. Chapters and pages could also be printed. For courses in areas such as accounting, printing was more necessary for worksheets.

Phase One Integration: In Septembers 2013, the e-textbook initiative was expanded to 34 programs with 363 courses, about 4,000 first-entry students and 16,800 e-resources from the original 4 publishers plus a number of other, smaller publishers. The students were charged for the resources through a course ancillary fee. The College directly pays the publishers for the e-texts for 100% of students still registered after the first 10 days of class.

In this phase, the students paid 63% of what they would pay for a print book. The students get three-year access to the online versions of the e-texts; the e-texts downloaded to personal devices have no time limits on access.

Algonquin negotiated individual partner agreements with the four publishers in order to develop a business model that can be used for further negotiations. The e-texts are provisioned to the students through the College’s LMS (Blackboard).

VitalSource is the platform that allows students to read their e-textbooks on their mobile devices, including laptops. Students install the VitalSource bookshelf onto their mobile devices, and then each new e-text is made available based on the courses in which they are registered. The platform allows students to manipulate the text online by highlighting sections, making notes, transferring the annotated text between devices; they can also transfer passages of text to Word and the system supplies a footnote. Colour-coding can be used as well to indicate, for example, passages particularly important for tests or sections with which the student is struggling.\

To comply with the Accessibility for Ontarians with Disabilities Act, the font size can be increased and the text can be converted to audio. The development of the accessibility was guided by a fully blind student who advised Algonquin on how he would use the e-texts. In addition, the e-text publishers are now delivering their resources in all formats to Alternative Educational Resources of Ontario (AERO) weeks prior to the start of classes so that timely modifications for accessibility can be made. Previously, it would take up to 3 weeks for a resource to be converted after a student request. By September 2014, about 1,200 resources will have been supplied to AERO, which is a digital repository operated by the government of Ontario to provide alternate format text to students with perceptual disabilities who attend publicly-funded educational institutions in Ontario.

It was recognized that some books would not be effective as e-texts, such as workbooks and manuals. These are supplied in print, but are also covered by the course-level ancillary fee for the e-texts and are available through the campus bookstore. In this way, the commitment to students having 100% of the resources is upheld.

An e-text advisory group representing students and 16 departments on campus has been set up, as well as a smaller working group, to focus on issues of communication, integration, support, and engagement.

Phase Two:  The use of e-texts in the 34 programs, which started in September 2013, will be continued in the winter semester beginning in January 2014, with a few enhancements. Three student kiosks will be added for e-text connectivity and informational support, staffed by first-year students. An improved print management strategy will map the high-speed printers on campus, with information on how to print from various devices and the customization services available from the College print shop. Informational short messages regarding e-text services will also be sent to student phones in a test of push notification.

Phase Three: In September 2014, e-texts will be introduced in all full-time programs, including 9,000 first-level students and about 2,800 students continuing from the 34 original programs. This will involve about 40,000 e-resources. By 2015, the initiative will include all students.

Professors benefit as they can plan and teach knowing that all students have the e-texts and can do the readings and exercises, in addition to having access to the supplementary material supplied by the publishers. The use of e-texts encourages the greater integration of open educational resources, another College initiative.

As only required e-textbooks are provided through this initiative, faculty re-assessed their chosen texts, leading to a reduction of 15%-20% in the number of required texts.

Publishers benefit in that the College buys the books for 100% of the students. The usual practice for print sales is that about 80% of a class buys a new textbook when it is first available.  In the second year, perhaps 40% buy the book new and the others buy it second-hand, and, by the third year of textbook life, it may be only 20% of the class who buy the book new from the publishers. With the Algonquin model, the College buys the book for 100% of the students every year, albeit at a reduced price, and the publisher saves the costs of printing, shipping, and returns.

Using a simple example, in a course with 100 students and a $100 text offered at a 50% price point as an e-text, the publisher would receive 100 students X 3 years X $50 reduced price equalling $15,000 with no additional costs for printing, etc. With a print text, the sales would be 80 students in the first year, then 40, then 20 or 140 overall so 140 X $100 or $14,000 plus the cost of printing, etc.  When this formula is extended over multiple programs, with a commitment from the College to buy for 100% of the students every year, the financial benefits to the publishers can become substantial.

Publishers are also developing a new business model that can be extended to other institutions. One particularly distinctive aspect of the Algonquin approach is the use of one platform (VitalSource) for all e-texts. This, as explained by Larry Weatherdon, the eTextbook Manager, is contrary to the intent of publishers to each create their own platform. Having a single platform benefits students, institutions, and, as illustrated above, the publishers themselves.

Benefiting students, professors, and publishers is the ease of revision, corrections, and additions to e-texts, so e-textbooks can be kept current at minimal cost.

In 2015, the initiative will be fully integrated in the College and management will move to the College bookstore. Staff will be trained for the tasks involved in sustaining the e-text initiative, thereby developing a continuing role for the bookstore in the infrastructure.

Students in e-text programs have said that reading the texts on laptops is awkward as they are too heavy to carry around, and switching between programs (such as Excel and Word in accounting courses) can be awkward. In response, the College is assessing a variety of tablets and their adaptability in supplying access to the LMS, e-mail, and the e-texts.

In January 2014, the College will purchase 200 tablets to test whether the combination of laptop and tablet improves the portability of e-texts. This also requires the development of a model in which the students without a tablet could lease one from the College for a set fee per semester. They could then take the tablet with them when they graduate. The College-wide integration of the Mobile Learning Initiative in which every incoming student has at least one mobile device as required by their program is essential to the success of the e-text initiative. In turn, having e-texts also extends the effectiveness of the Mobile Learning initiative.

Introducing the e-text initiative has been complex because of the number of people and divisions involved – all academic areas, the registrar, the bookstore, shipping, printing, administration, and, of course, students. The progress was carefully staged and required full support from senior management.

Although the College has been integrating mobile devices for 10 years, the unprecedented demand for wireless in September 2013 caused many difficulties, creating considerable frustration. This was not an issue with VitalSource, the e-text platform, as its online activity is remote, but with access to the LMS required to download the e-texts. This spilled over into higher demand to print the e-texts, which was difficult to fulfill. The wireless issue was resolved in a couple of weeks but created a difficult start – and a significant indicator of needs for enhanced wireless capacity.

Large-scale and sustained outreach to faculty and students is essential. An e-textbook site provides support for students and faculty, as well as information on the initiative and its implementation.

The goal is a 50% saving for students on the print price of the textbooks. This should be possible once critical mass is achieved in September 2014, with all full-time programs (about 150) using e-textbooks.

Algonquin has about 7% of the Ontario college population and annual text books sales of about $10 million. Extrapolating to the broader college population in Ontario indicates about $120 million spent annually on textbooks. Based on the potential of this model with 50% savings, using e-texts could result in Ontario students saving about $60 million on texts annually. As illustrated above, the model can also work for publishers, resulting in a win-win-win situation as the colleges then have a student population fully equipped with the required texts.

Two models for payment have been developed to serve Algonquin’s various campuses. The one described above is the Institutional Pay Model. The alternative is the Student Pay Model, which will give students access to the same e-texts at the same prices, but will be used for students without access to the LMS, such as those in Continuing Education courses or at Algonquin campuses in Montenegro, India, Saudi Arabia, and China. These students would pay for the e-texts themselves, but would receive the same flexibility concerning multiple devices and lifetime access. This model is expected to be implemented in Spring 2014.

As Glenn MacDougall expresses it: “You are only limited by imagination as to what you could do next.” For example, soon professors will be able to highlight and comment on e-texts, and students can have access to these notes. Another is the negotiations with publishers, as Algonquin was “looking for partnerships, not vendor relationships. And they are all very, very supportive.”

Other Ontario colleges have approached Algonquin in order to negotiate with the publishers as a group, allowing for even greater critical mass and potential savings.

Glenn MacDougall and Larry Weatherdon are very willing to share their model and experiences with their college and university colleagues, as they believe it holds great promise for students across Ontario.