Playing to Learn: A disaster simulation game for interdisciplinary learning at Centennial College

As part of a project funded by Health Canada, Centennial College, the Michener Institute for Applied Health Sciences, the University of Toronto, Ryerson University, and George Brown College, all in Toronto, came together with other health and emergency service organizations to design an online course for emergency preparedness training. The full team working on the project included the nine hospital members of the Toronto Academic Health Science network, patient and learner groups, and municipal, provincial, and federal government policy representatives.

Through the project, the Interprofessional Disaster/Emergency Action Studies (IDEAS) online course was structured to improve interprofessional team performance in patient-centred practice and increase the efficiency of health care systems in a disaster/emergency or pandemic situations.

The goal of the IDEAS course is to provide undergraduate students from the five participating educational institutions in nursing, medicine, paramedicine, police, media, health administration, and other programs with an eight-week online course, inclusive of a live mass casualty exercise. At Centennial College, which administered the Health Canada funding, Nursing, Paramedicine, Pharmacy, Pharmacy Technician, Police Foundations, Social Service Worker, and the Centre for Creative Communications programs were involved in the development and testing of the course.

The design team set out to:

The Online Curriculum Committee combined subject experts in disaster management and interprofessional education, along with an instructional designer, an e-learning analyst, and a game developer. The online modules provided content and exercises on topics such as preparing for disasters, sharing and directing information and resources effectively, skills inventory and simulation preparation, team cohesion, and accountability and systems analysis. The students volunteered to take part of the first course offering, which was accompanied by extensive research. Most of them took the course for interest, with only the nursing students getting partial credit. Over the eight weeks of the course, students were expected to spend about three hours a week in asynchronous study, including weekly online discussions with the instructor and other students.

Two live simulations were part of the course, one involving a pandemic and the other a dirty bomb. In both cases, students were assigned roles assisting victims, family members, or the professionals, such as fire, police, hospital, and emergency service staff, taking part in the simulation.

Integral to the course, real-time online games, Disaster Strikes, were developed – based on disasters including a hostage taking, a hurricane, a tsunami, and a pandemic.  The students were assigned to teams – security, safety, health, and psychosocial – in groups of five to participate in the game.

Under the guidance of a faculty facilitator, each game was played online over the period of an hour, with the students in the various groups receiving ongoing information on the disaster. For example, with Katrina, they received media loops of news and events such as floods and power losses, and had to respond to the implications and determine what actions they would take. They would discuss possible responses using the keyboard for input and vote on a decision which, to add to the realism and group dynamics, could be overridden by the team leader. Some events/decisions would be specific to one of the groups, while others would involve all groups. The decisions were not structured to have straightforward right or wrong answers, but to move the exercise forward and shape the next phases of the game.

The dashboard for the game, presented below, illustrates how the students received and shared information throughout the game. 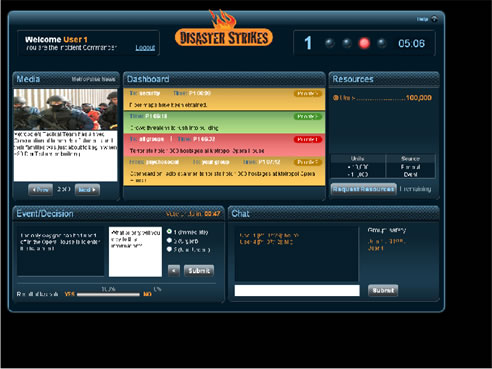 After the game, the students spent another hour online debriefing the exercise, looking at what was learned, the strengths and weaknesses of collaboration and communications within and between teams, as well as analyzing the decisions and the impact of the various roles. For example, in considering interprofessional collaboration, students looked at how the “doctor” was responded to as compared to the “nurse” or other team members and the impact of the leader changing decisions. The impact of the decisions was also considered to analyze how the reaction to the disaster might be improved.

The course and game have been updated and integrated into a clinical course in the Ryerson, Centennial, and George Brown Collaborative Nursing Degree program.

The research following the course comprised focus groups and surveys to investigate changes in disaster management competencies and interprofessional attitudes. Both received positive ratings with teamwork and collaboration and self-identification as a professional as areas of particular progress in terms of interprofessional learning. For disaster management, students gained in understanding personal responsibilities, effective communications, and safety measures.

The implementation of the course and the research revealed challenges in structure and content:

Spearheaded by Dr. Laurie Mazurik at Sunnybrook Hospital, partners are being sought to update the course, including the game, both in terms of technology and content.  Part of this might include introducing voice communications, rather than the keyboard-based style of the original games.  Input is being gathered from potential partners across the country to ensure that the eventual re-design meets the needs of multiple professions involved in emergency management.